Laetitia Soulier’s Suspended Stories in Fractal Architecture “All the world’s a stage and all the men and women merely players. They have their exits and their entrances and one man in his time plays many parts, his acts being several ages.” – William Shakespeare, As You like It, Act II, Scene VII. Exits, entrances, peep holes, rooms inside rooms, characters evolving through generations in one pictorial plane; these are the elaborate worlds inside the photographs and sculptures made by Laetitia Soulier in her recent exhibition Fractal Architectures at Claire Oliver. Each sculpture is a constructed set and each photograph is a staged activation of the sets. She uses the sets to play with scale, creating micro and macro worlds in the architecture and timeless layers in the narrative.

When first entering the exhibition, one might think of other works from M.C Escher to Wes Anderson to Franz Kafka to Lewis Carol to J.R.R. Tolkien. The theatricality and mixture of mystery and absurdity, the false perspective and metaphorical grounds, the clues and detailed points of intrigue — all create a reference to a story I want to read. Another association that came to mind is the shortest story Ernest Hemingway wrote “Baby shoes, for sale, never worn” This famous six-word story provides just enough information to grab one’s attention inquiring — what happened? Or as Henry Green once said of stories, “The more you leave out, the more you highlight what you leave in.” Soulier’s works will make one wonder, yet I immediately had a strong sense of how, by simply looking and being active within this architecture, I was already involved, simply by just walking into the gallery. It’s as if, someone else of some other time and scale is peeking through a window I cannot see, writing my character in, writing how I just quietly closed the door behind me and walked up the stairs. 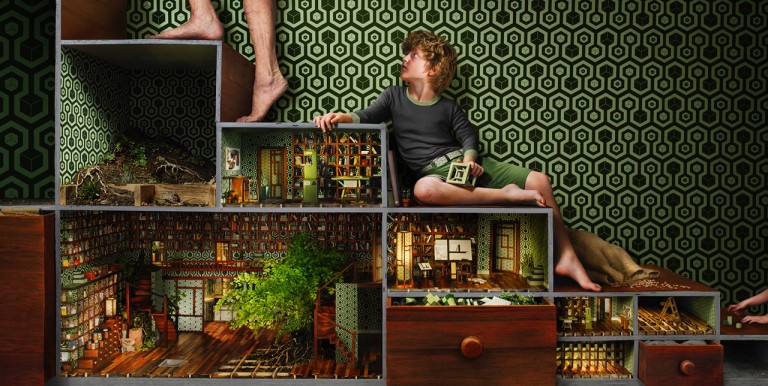 Soulier’s process is as fascinating as the result, beginning with a research phase where she conceptualizes the series, deciding on a specific fractal geometric pattern and designs a wallpaper with that pattern. She uses the pattern as the basis for the architectural floor plan of each model and the creation of the furniture, makes a character for the set and builds it based on their qualities such as size, shape, and hair color. The set is also built from the perspective of the camera, which is on a stand during the entire construction. Page 2 of 18 Every single object in the photograph is built at the studio and once all the props are in place, she lights and photographs the set. Due to the very detailed quality of the architectural model and the large number of lights needed, she divides the photograph into sub-tableau and lights them independently before recomposing them in Photoshop. This last phase of post-production helps to nuance the colors and contrast of the image. The final photographs are large scale and all the images in one series are printed at the same time, so that the light and color dynamics are coherent throughout.

The repetition of fractals, also known as expanding or evolving symmetry, can be used for describing, measuring and predicting natural phenomena and defining the world using mathematical equations. Soulier uses this as her building blocks and then plays with subjective narrative in between this solid framework. An individual’s gravitation towards geometric patterns and the history of this in the collective unconscious in differing cultures also arises when viewing her work. The Swiss psychoanalyst Carl Jung pioneered exploration of the unconscious through research and his own art making. He wrote observations on the motif of the circle after he found himself drawing patterns of circles in his own artwork. Familiarity with the philosophical writings from India, Jung began to study the geometric patterns of the mandala and re-introduced them into modern Western thought. In Indian religions they are a spiritual and ritualistic symbol that represents the universe and serves the purpose of restoring a previously existing order; but it also serves the purpose of creatively giving expression and form to something that does not yet exist, something unique and new. Soulier’s work also references this unseen structure of the universe that is underneath all of our worlds.

Often working with child subjects, Soulier does so symbolically portraying the physical and psychological collective growth process. Explaining, “The fractal architecture mirrors the children’s transformational process as the rooms and objects appear in different scales within these spaces which are at once [representative of] their toy, their home, their childhood, the space between their past and their future. Children begin formulating logical reasoning at eight years old, their minds having reached a critical place between the rational and fantastical. This is also reflected in our collective development; the age of reason historically appears in the 17th Century with Descartes and the development of science. This is an age when our conception of the world collectively shifted. This paradox is always at play in my work, which is systematically and logically composed, yet reveals a fantastical dimension.” The work brings out how this geometry can come from both a logical understanding of the universe and from a pure place of the individual imagination. 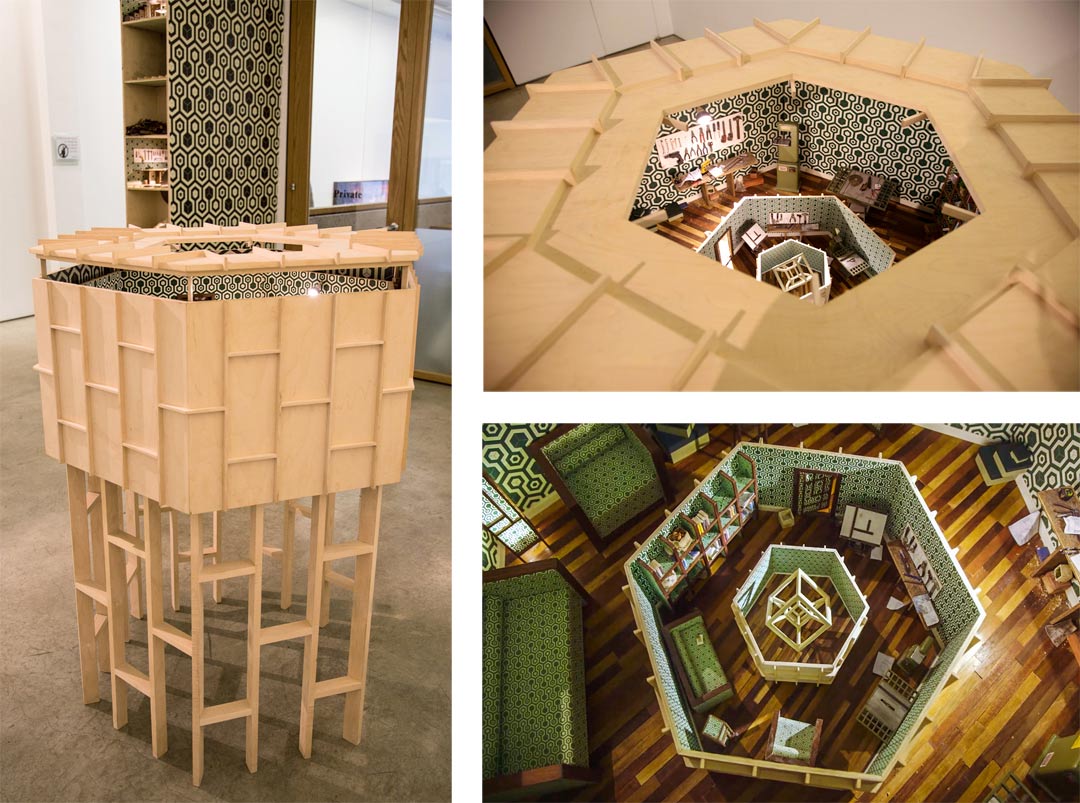 The work in Fractal Architecture conjures visions of intriguing architectural structures like the panopticon or the labyrinth, like palaces or hotels, large residential edifice abounding with chambers, nooks, alcoves and stories. They are symbols of homes and metaphors referencing the idea of a home rather than homes themselves. The voyeuristic nature of the panopticon, built so its inhabitants can be observed without being able to tell whether or not they are, specifically shapes their experience inside this anthropomorphic architecture. The name is derived from a reference to Panoptes, a giant watchman with a hundred eyes in Greek mythology. The labyrinth is an elaborate structure designed by the legendary inventor Daedalus for King Minos of Crete at Knossos. It is a unicursal path of classical design without, unlike a maze, any branching or dead ends and therefore there is only one path to the center. A labyrinth is not difficult to navigate yet it is often used as an architectural metaphor for our experience of place as both objective and subjective.

The architecture in her photographs and sculpture, forces the viewer to navigate around in their own individual way. In The Square Roots a sculpture from 2015, one might have gravitated towards some of the live plants and terrarium sections immediately and in doing so may realize that the experience of the story had unfolded backwards. Each experience of returning to particular works, could expand upon an original story or started a new one, reflecting on how the architecture shapes us and how we shape the architecture. 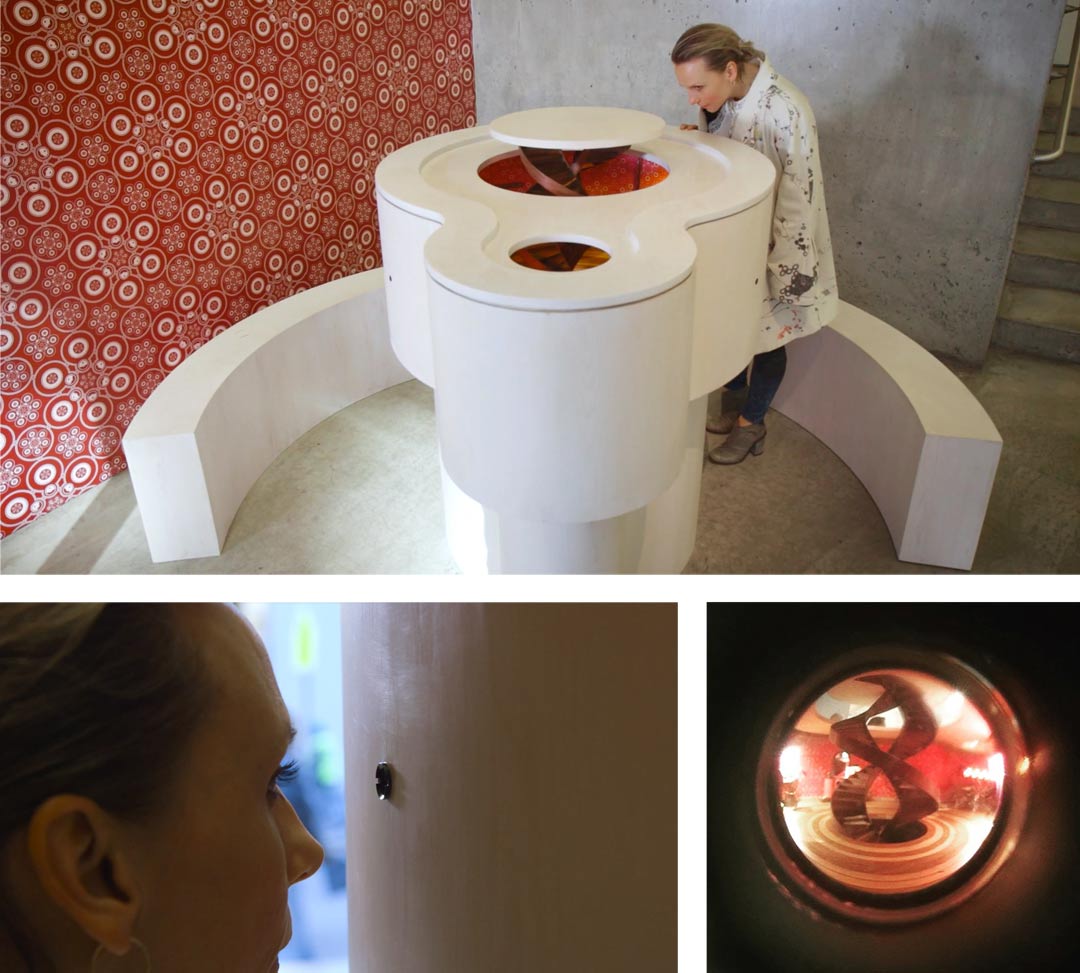 This exhibition elaborated upon a new normal. The intriguing part is how the work takes a definitive structure and forces it open, again and again upon itself until we are left with the most subjective and indefinite things — our perspective, our experience, our point of view. It is that symphonic scale of this work that does justice to the complexity and interconnectedness of our world with all of its logical ground and all of its magical mystery. Author Philip Pullman wrote, “After nourishment, shelter and companionship, stories are the thing we need most in the world.” Lewis Carroll in Alice’s Adventures in Wonderland stated “No, no! The adventures first, explanations take such a dreadful time.” Soulier’s worlds deliver all of the above plus whatever you, as your own character bring to the tale, table, mirror or window. 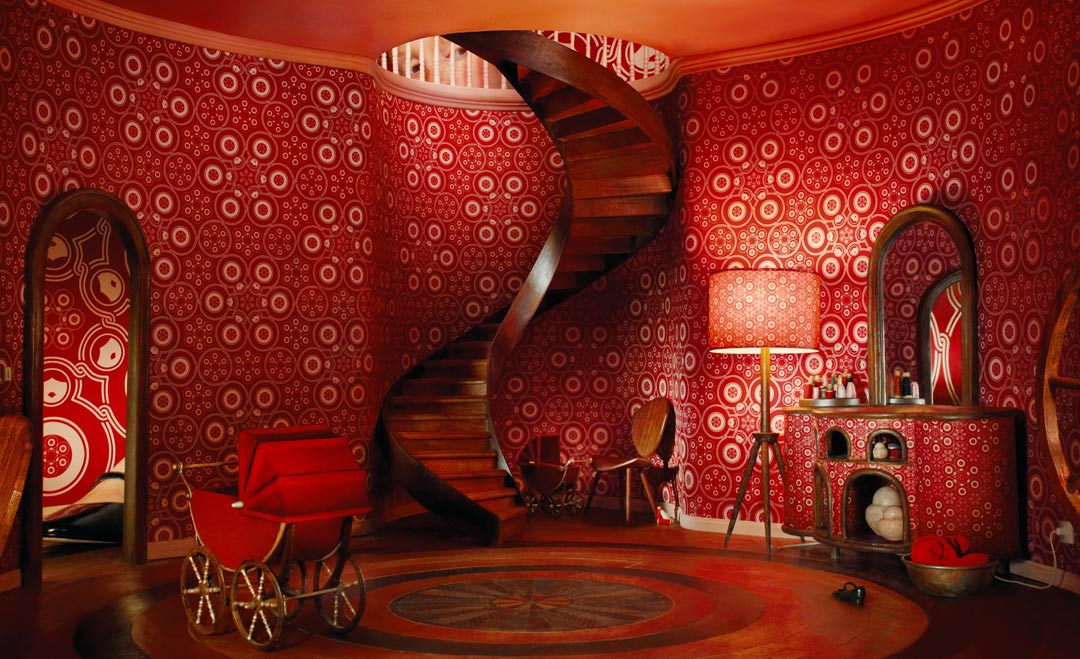